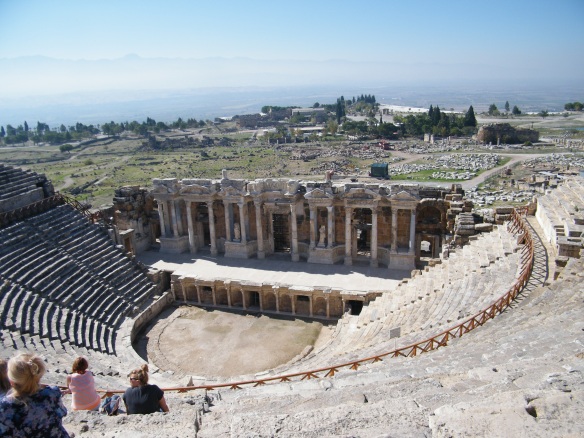 The amphitheatre at Ancient Hieropolis above Pamukkale.

In this chapter of our Turkish adventure we briefly visited Pamukkale for a 12 hours speed visit before continuing on to Selcuk. We had a fair amount of distance to cover in a short time after getting off the ferry in Marmaris; a bus and taxi getting us to our accommodation late at night in Pamukkale, plus a mini-bus to Selcuk the next day to look forward to. It was this bus between Marmaris and Denizli that I had nightmare motion sickness, as Tom so kindly pointed out to me while proofreading this post. I don’t think he will ever let me forget that journey, especially as Claire one of our travelling companions, had to mime needing a sick bag to the young bus host (poor guy), he didn’t speak much English and looked mortified as he thrust about 10 sick bags in my direction. Luckily buses an are easy and convenient method of travelling in Turkey (unless you forget to take your travel sick pills), we had no issues with heat, overcrowding or security of our belongings. A few had screens in the back of each seat for entertainment, all the buses we took had WiFi and from memory cost us about $30 Lira at most. 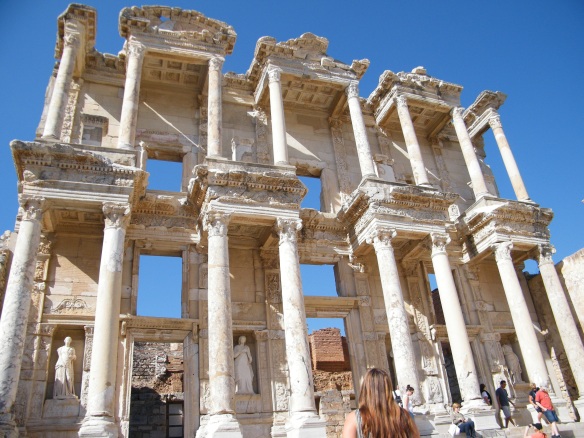 The towering library facade at Ephesus

We had planned out our travelling so we had time for a quick visit to the Pamukkale calcium terraces (travertine’s) before getting back on the road. Our information on this area was a little limited so we didn’t really know what to expect, and having taxied in at midnight the previous day we had seen very little while driving through the streets. After a breakfast spent chatting to our host at the hotel (we saw no other people staying there) we left filled to the brim with recommendations; how to get to the calcium travertine’s, how long to spend there and his best advice: our transport to Selcuk that afternoon.

Walking up the road we had no idea what we would see around the corner and were quite amazed to get to the end of the street and see a hillside of what looked like sparkling white ice. Entry fee paid and map in hand we ventured towards the travertine’s pausing to remove our shoes (no footwear on the calcium as it stains or degrades it with all the visitors). It was such a strange sensation to walk up this hill with water running around our ankles, it just felt like textured white rock under my feet. On the way to the top there are many differing natural pools formed, some with quite chilly water and others nicely warm. The closer to the top we got the stranger sights we saw, mainly of the people watching variety. Holidayers lounging around in swimwear, posing for risqué photos taken by their loved ones or people like us: in shorts and singlets sloshing our way through the pools, shoes in hand. 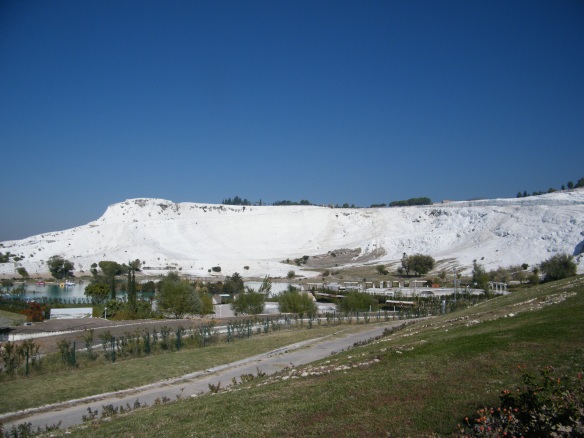 Looking up the hill at the calcium terraces at Pamukkale

The sights at the top were even more surprising, I had been informed by my Aunty who had also visited Pamukkale on a tour group, that we should go for an explore over the area above the calcium travertine’s. Sure enough we discovered that we were wandering through the ancient city of Hieropolis, complete with a stunning amphitheatre in incredible condition. This took up the remainder of the morning and we needed to head back to our hotel; tired, hungry, sunburnt (me) and bleeding (also me; stubbed toe). Our bags on our back we said farewell to our host and headed to the departure point and lunch. As I had thrown up on the bus trip the day before I was now banned from lunches before travel and looked on longingly at the bread filled with chilli lamb mince which was lunch.

Our arrival in Selcuk was just the driver letting us know that this was where we get off and the hostel was in direction X,Y,Z. Hmm confusing but we turned a corner and there it was, home for the next night, no stress required.

The next day was quite leisurely although we still had travelling to do that afternoon, we had a late-ish start and eventually made our way by taxi towards the entrance of Ephesus. What a great place, even in November there were still a lot of other tourists as well as school groups and other tours in the site. There is so much history here and really well detailed signs around the various parts of interest, we didn’t join a tour or hire audio guides and didn’t feel like we missed out. It was recommended that we start at the far away entrance for two reasons: 1. So we could walk in a single direction from the start back to the township without having to double back and walk further, and 2. Because it amps up the suspense to catch little glimpses of what else is in store further down the streets of the ancient city. We passed on paying to view the enclosed terrace houses which are still being slowly reconstructed, instead becoming increasingly excited at the views of an incredible two story façade we were getting closer to. The Library of Celsus is by far the most magnificent structure at Ephesus, it looms above you from the street below and made my mind boggle at how archaeologists, engineers and whoever else is involved in these restorations do these recreations.

After marvelling at the Library for quite some time we moved to to see the amphitheatre, the colonnaded street and at the exit (or entrance if you were to view it the other way around) there were many stalls selling “genuine fake watches”, which we all had a giggle about.

The walk back to Selcuk was only about 3 km but we were in no rush, especially as I was rather sunburnt from the previous day. We were quite lucky to have stunning weather for all of our trip except for the first two days in Istanbul, and I had great Jandal (thongs or flip-flops for those non-New Zealanders) tan lines at the end.

On the at back we stopped off at the site of the Temple of Artemis, one of the ancient wonders of the world. It’s a swampy field, complete with frogs, a large stacked column and a smaller stacked column. A little disappointing as I think I had romanticised it in my head but maybe that’s just from playing too much Civilization (the computer game). It seems that a majority of the remains of the temple have made their way to various museums around the globe. On the bright side it’s still fun to say we have been to the where it once stood.

Returning to Selcuk it was time for lunch, pide and gozleme washed down with Efes which seemed to be the beer of choice everywhere we went in Turkey. With time to spare Tom decided that he needed a haircut, so us girls left him to that while we wandered some shops. Once we met back up with a newly shorn Tom it was time to pick up bags and board the train to Izmir for the next stage of the journey back towards Istanbul. But first; Izmir, Cannakkale and Gallipoli.

Thanks for reading about our adventures in Turkey, I have two chapters/parts/stories/posts, whatever you want to call my recounts of this holiday to go.

1 thought on “The road to Ephesus”